The Transpacific Yacht Race is one of sailing’s great traditions. In July, David Dahl, president and CEO of Whittier Trust, and his sons, Michael and Sean, competed in their first Transpac aboard Compadres, representing Newport Harbor Yacht Club and Balboa Yacht Club in the race. The Dahls were part of a crew of 14 OC-based sailors on the yacht, including Dave Clement and captain Tyler Wolk. Dahl and Clement are partners in ownership of Compadres.

The Transpac starting line is off the bluffs of Point Fermin in San Pedro, and the finish is off the Diamond Head lighthouse east of Honolulu. Total distance: 2,225 nautical miles. The crew of the Compadres and the other competitors enjoyed fast downwind sailing as the weather warmed after the first few  days. The yachts sailed through squalls, slalomed through debris, navigated near-miss crossings with other yachts in the race, and solved problems on the fly with little sleep.

“Racing the Pacific Ocean, encountering whales, 20-foot swells, debris, and wind speeds at night with families on board. It is a test of the human spirit,” says David Dahl.

This year’s race organizers and participants faced another challenge: COVID-19, which impacted logistics and social events at both the start and finish. The race  hired an expert consultant to create protocols for safety and compliance in California and Hawaii.

Transpac has been raced biennially, with few exceptions, since 1906. One such exception was World War I. When the race returned in 1923, the family that founded Whittier Trust was represented at the start, beginning a nearly 100-year legacy with Transpac.

Brothers Don and Paul Whittier sailed the 107-foot yacht Poinsettia in the ocean race. Their father Max Whittier was an oilman who co-founded and developed Beverly Hills. The Poinsettia was built in Germany for Crown Prince Frederick, and had never been defeated in races along European canals. It was confiscated by the Allies during the war, and brought to Los Angeles afterward by the Whittiers.

Poinsettia was manned by a professional captain and first mate, a cook who had spent seven years in the service of Teddy Roosevelt, and a crew of 14 college friends of the Whittier brothers, most of  whom had never been to sea. Alas, the 1926 Transpac race did not go well for Poinsettia: A two-day long storm forced  her to return to San Pedro. It was the start of a 100-year legacy of the Whittier family competing in Transpac, a legacy Whittier Trust celebrates by underwriting the race as Heritage Sponsor.

“I can vividly remember my uncles racing in one of the first Transpac races,” says Winifred Rhodes, granddaughter of Max Whittier. “We’ve had several family members race over the years. “

The Compadres finished fourth in its division. After routinely sailing at 20 knots, the yacht and crew experienced mechanical challenges the last few hundred miles. Some crews might have just proceeded under power for the rest of the race. The Compadres crew chose to finish strong by sailing in on partially repaired sails. Michael, Sean, and David Dahl shared a watch, and found that they got along well on board, “maybe better than on shore,” Michael says.  In the long tradition of Transpac, the Compadres crew was greeted with Mai Tais when they arrived in Honolulu, celebrating  their perseverance, camaraderie, and teamwork. “We are rewarded with being part of a team,” David Dahl says. “And the thrill of the experience.”

David Dahl, CEO of Whittier Trust, invited a few guests (including Blue Door Magazine publisher Maria Barnes and photographer Brett Hillyard) aboard Compadres for a pre-Transpac cruise around Newport Habor. Also aboard were Compadres captain Tyler Wolk; crewmember Brett Scott, who made the Transpac crossing with her father Bart Scott; Clare Dahl, David’s daughter; plus a few lucky Whittier Trust interns, employees, and friends who enjoyed an afternoon on the water.

bluedoormagazine
•
Follow
It was a celebration at the Love Tribe project fundraiser, Le fete de l’opera, which was a night to remember with its Paris Night Club theme from the 1930s. Read more in Blue Door Magazine about the most happening galas and fundraisers occurring in coastal Orange County to support nonprofits and organizations making a difference in the world. @bluedoormagazine @Juliaguenther007 @mariaebarnes @lovetribeproject @lafetedelopera #bluedoormagazine #juliaguenther007 #mariabarnes #lovetribeproject #lafetedelaopera #1930style #ocnonprofit #supportingwomen
View on Instagram |
1/9 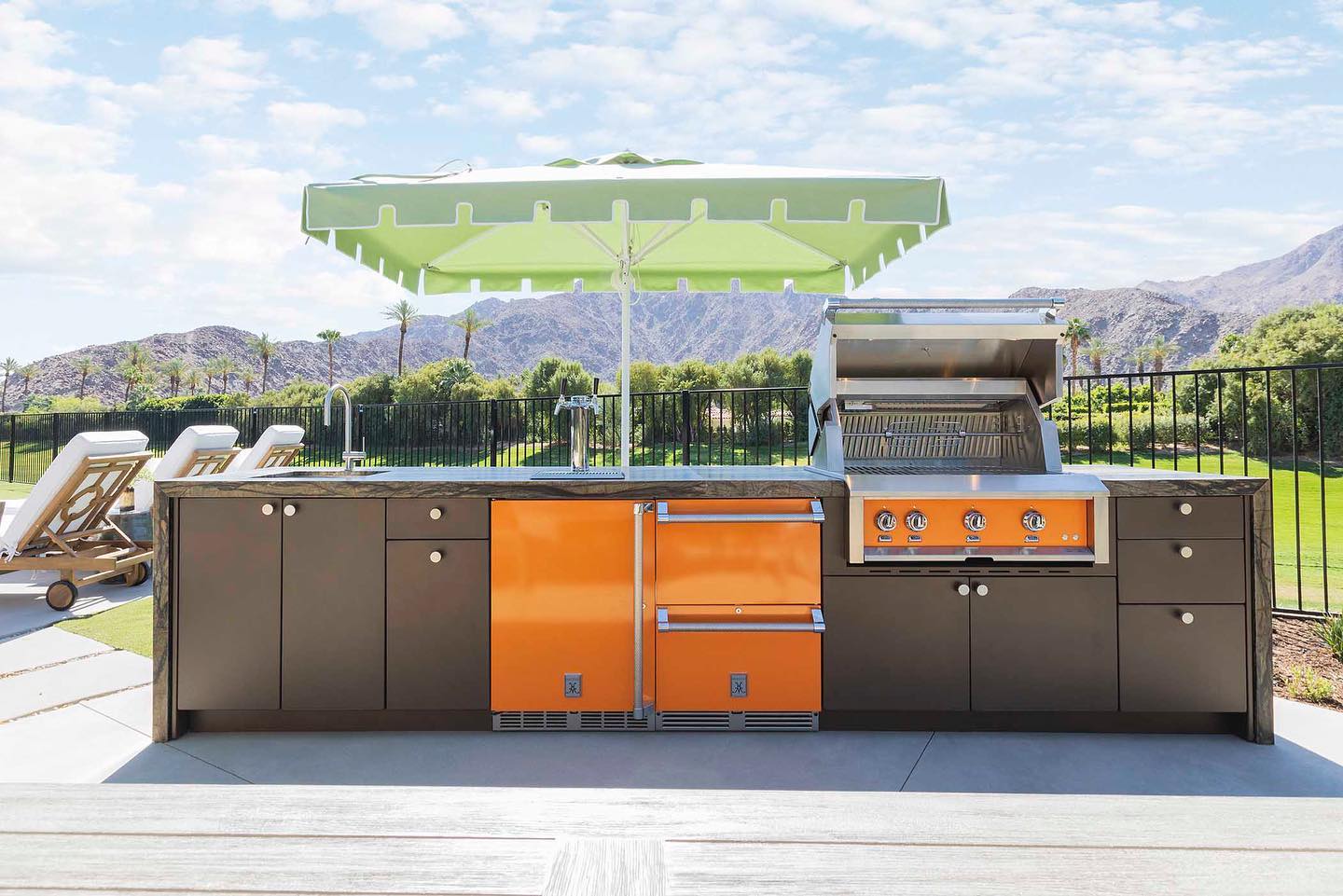 bluedoormagazine
•
Follow
The Indian Wells showhouse called “Desert Oasis” offered colors one might not expect, thanks to its modern Polynesian aesthetic. Homeowners tend to have more freedom in color choices outside than in, which is where Moya O’Neill paired Hestan appliances in a Citra orange with Moya Living’s stainless steel cabinets. Read more about Moya Living in the current issue of Blue Door Magazine. @bluedoormagazine @moyaliving #bluedoormagazine #moyaliving #outdoorliving #coastalorangecountyliving #outdoorcooking #designandstyle
View on Instagram |
3/9 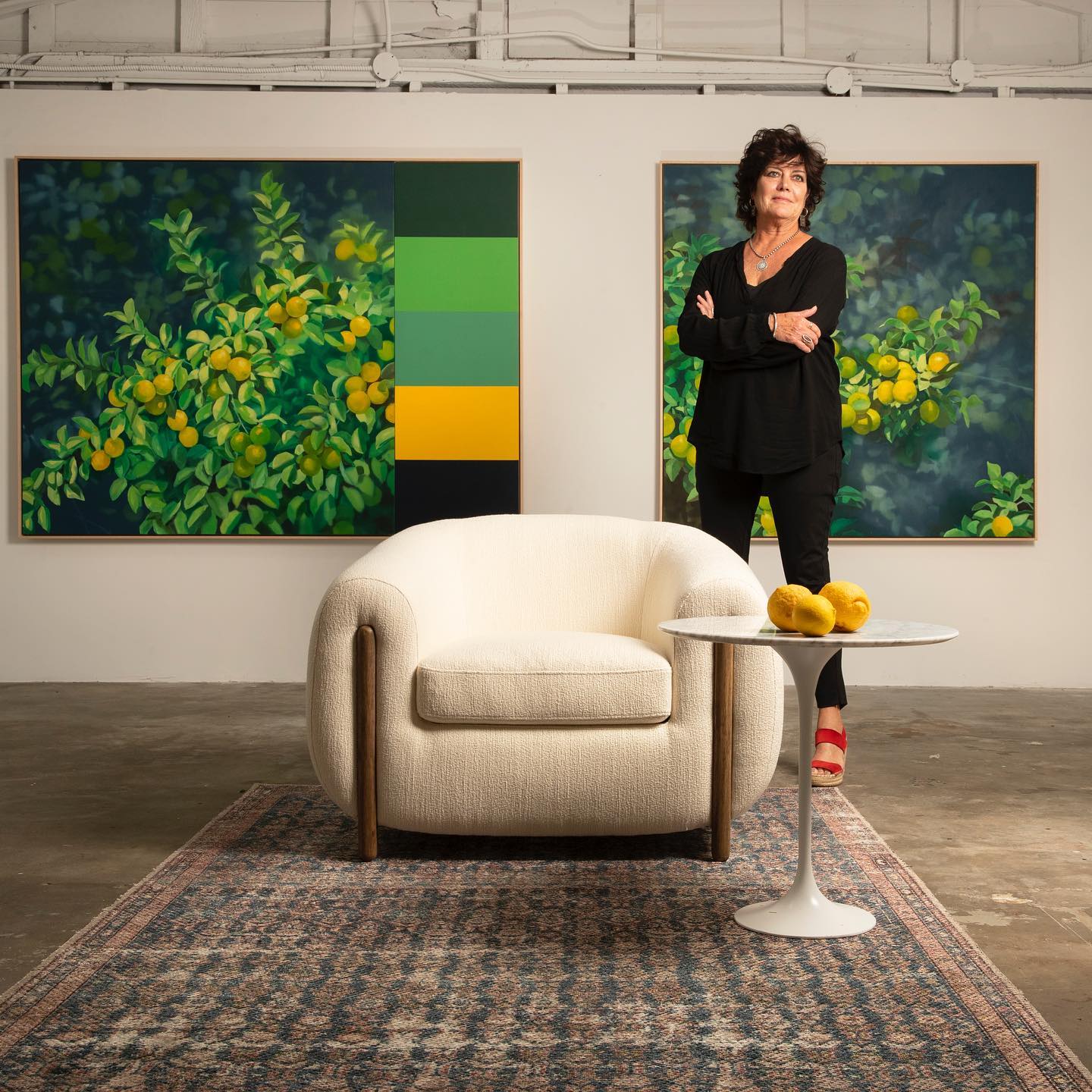 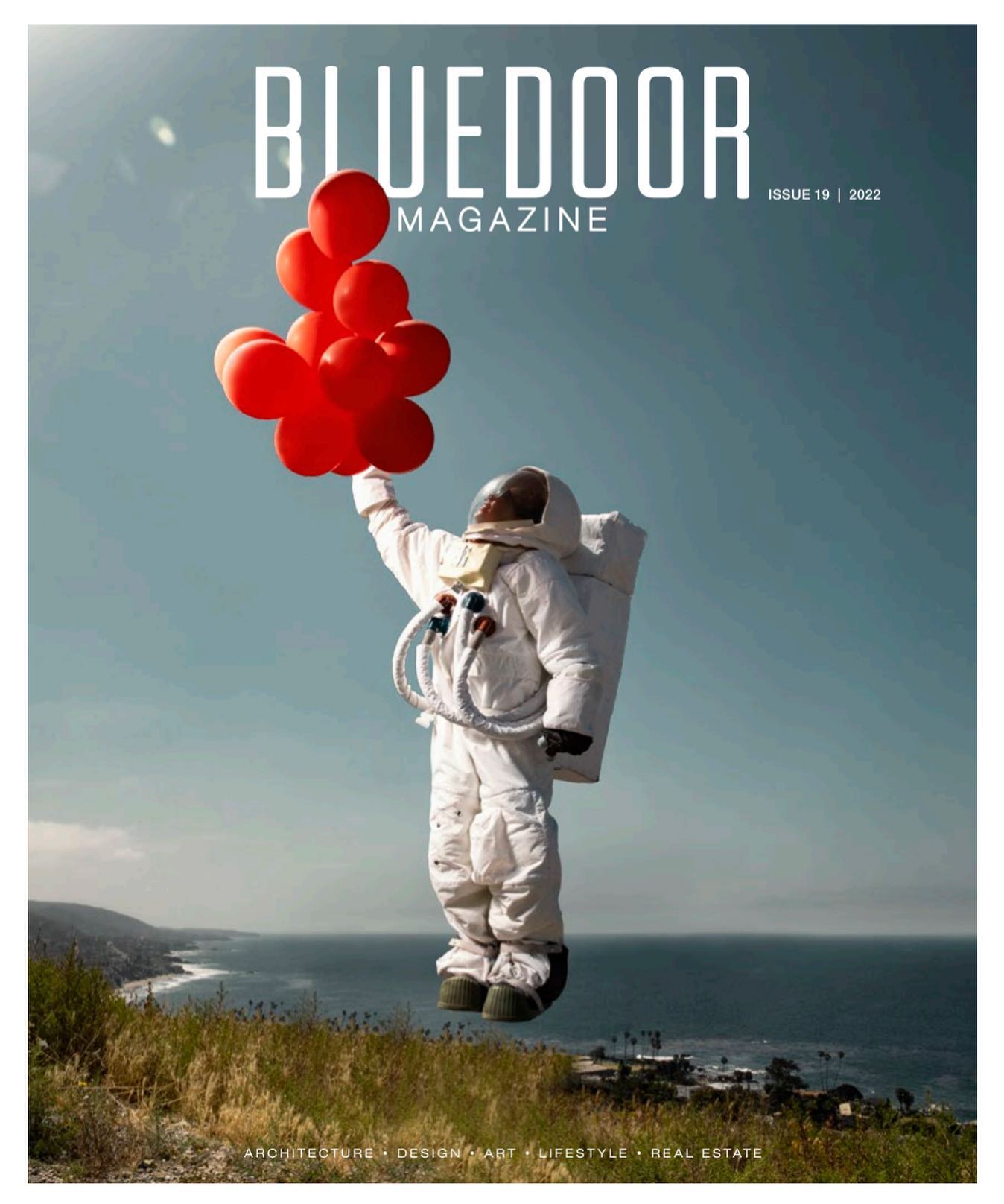 bluedoormagazine
•
Follow
The new Blue Door Magazine has arrived. “The cover was inspired by a photo session with our team at Mission San Juan Capistrano,” says photographer Brett Hillyard. “While shooting at the Mission, that word mission stayed with me, and my brain envisioned an astronaut. It took some convincing, but I was committed to what I thought was a crazy and cool concept. We visited a few sites for the shoot, and finally we ‘landed’ at the Dartmoor Trail overlooking the Laguna Beach coastline. Lauren Horn did an amazing job modeling the heavy NASA suit in 80-degree weather. All the hot yoga she does helped her train for this moment! My favorite Blue Door Magazine moments are unexpected, with a bit of whimsy. That’s why I love this cover.” Model Lauren Horn of San Clemente is an asset manager with Palm Communities and a private yoga instructor. Pick up your copy of Blue Door Magazine today! @bluedoormagazine @hilly.photographic.initiative #bluedoormagazine #hillyphotographicinitiative #palmcommunities #onamission #orangecounty #coastalorangecounty
View on Instagram |
5/9 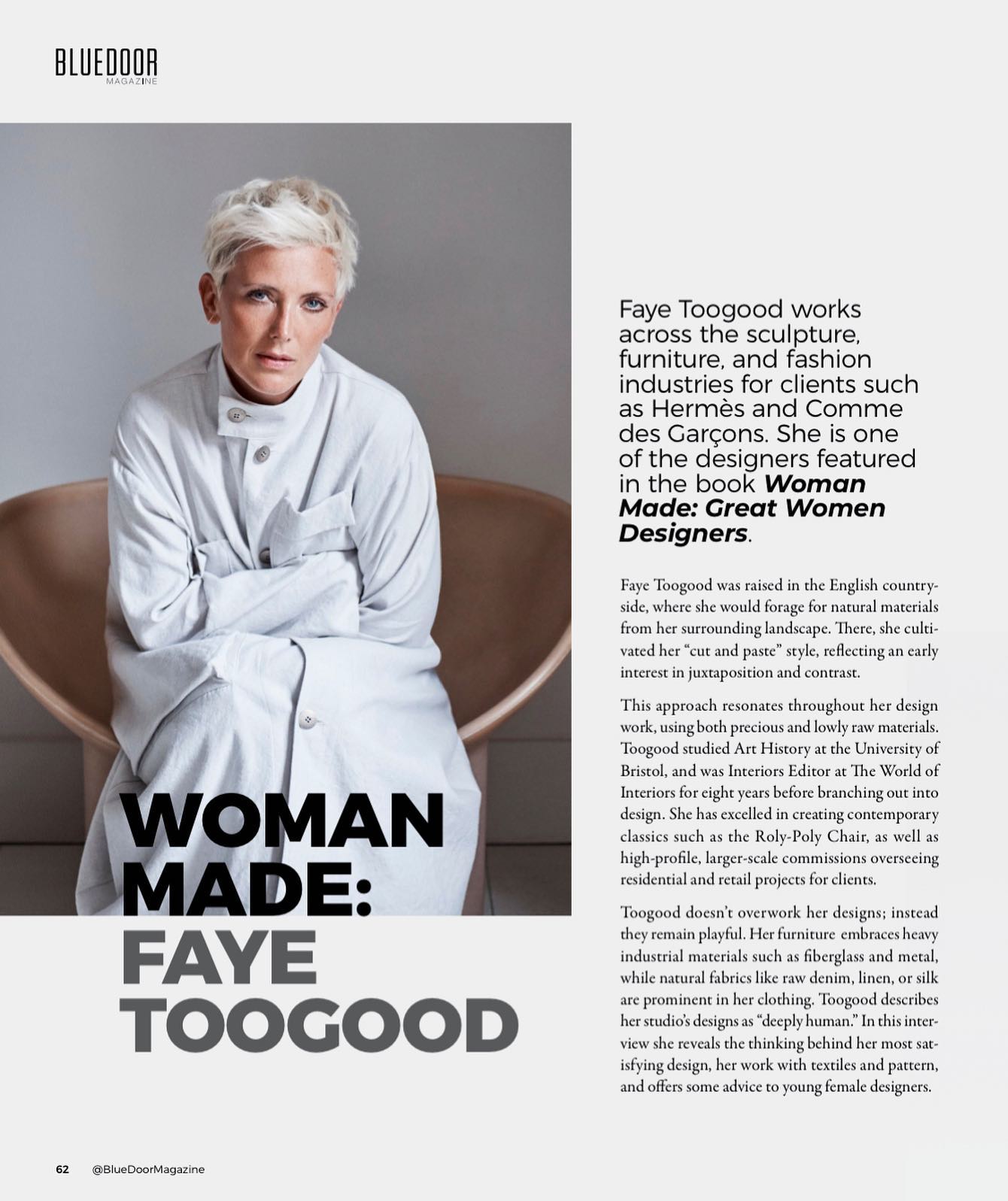 bluedoormagazine
•
Follow
Faye Toogood works across the sculpture, furniture, and fashion industries for clients such as Hermès and Comme des Garçons. She is one of the designers featured in the book “Woman Made: Great Women Designers.” Read more about Faye Toogood and her “cut and paste” style in the current issue of Blue Door Magazine. @bluedoormagazine @t_o_o_g_o_o_d #bluedoormagazine #fayetoogood #womanmade #design #lifeandstyle
View on Instagram |
6/9

bluedoormagazine
•
Follow
Designed by Rudolph Schindler and completed in 1926, the Lovell Beach House is considered by architects and academics to be the first truly modern home, and a timeless study in how to define domestic space in wood and concrete. Read more about how this home, “is perfectly designed to capture the California sun, the Pacific breeze, and the tremendous horizon view that stretches along the glistening strand,” in the current issue of Blue Door Magazine. Photos by Marvin Rand. @bluedoormagazine #bluedoormagazine #newportbeachhistory #iconicoc #orangecounty #newportbeach #historichomes
View on Instagram |
7/9